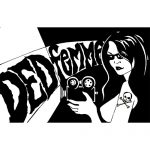 DEDfemme was established in 2016 as part of the Metro Cinema’s annual guest programming initiative; it is also a subsidiary event of DEDfest International Film Festival. With the growing number of women in the genre film community—as enthusiasts, active supporters and industry professionals—the need to give them an outlet to showcase their work and have their unique visions and voices recognized by the masses has also grown. The program runs on a bi-monthly basis serving as Edmonton’s exclusive series of women-helmed genre films. DEDfemme’s primary objective is to promote the unique cinematic visions of women in genre film and to celebrate and encourage the rise in women behind the camera.