In honour of this year’s International Women’s Day, Metro’s programming committee members have put our heads together (while staying physically far apart) to bring you a list of recommended films by women directors. Each member of the committee submitted a list of their personal favourites and we’ve compiled them for you below. Only 4 films showed up more than once, and the range of genres, styles, and eras represented speaks to the diversity of film appreciation within our ranks.

The members of the programming committee are: 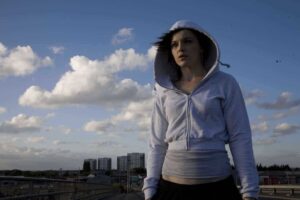 The new millennium has seen many directors bring the “documentary style” of filmmaking—mostly characterized by using available light and hand-held camerawork—to the world of narrative. But British auteur Andrea Arnold (who started her career as a background dancer!) somehow elevates this aesthetic to unparalleled heights through a potent combination of empathy, vulnerability, compassion, and attention to detail. Her films live in a space that somehow marries documentary and dream. Fish Tank—the story of a volatile teenager from a poor East London neighbourhood who longs for freedom—will charm you, then terrify you, and never let you go.  (Nnett Rhys) 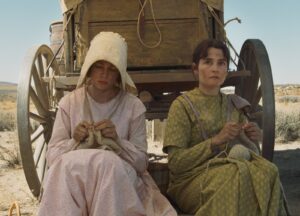 Director Kelly Reichardt brings a heroic level of restraint and naturalism to this masterpiece of contemporary filmmaking. With a bracingly feminist approach to the story of a group of 1840s settlers led astray by a blustery, fraudulent, unworthy leader on a journey to the American West, this film resonates loudly today. Reichardt’s command of deliberate pacing and blistering tension make this her most accomplished film.  (Lindsey Wasserman)

You’re in a forest – serene trees and whimsical creatures surround you but a dark undercurrent of fear lurks, fetid, ruining the spell and making the hairs on your neck bristle. You’re having a dream—white mice in dress coats sit around a table, play cards, and drink tea made of blood. Maybe it’s a nightmare—little woodland critters fashion a doll stitched with red string. No one talks but you understand. A fable of obsessive love and a struggle for power. Christiane Cegavske’s Blood Tea and Red String is a hypnotic fairy-tale both terrifying and beautiful. The result of laborious stop-motion animation and 13(!) years, it is not only a testament to the power of animation as an art-form but to what can be accomplished by a lone artist with Cegavske handling almost every aspect of the project (save the score by Mark Growden) from the creation of the puppets to the writing and animation.  A masterwork. (Maggie Hardy) 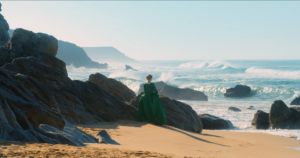 What does dramatic conflict look like if it arises not between two warring parties struggling to gain power over the other, but rather between two equals trying to understand their own desires? French filmmaker Céline Sciamma agonized over this question while writing the screenplay for Portrait Of A Lady On Fire, hoping to find an alternative to the conventions proliferated by the film schools and literature classes of her past. The resulting film is an enrapturing story of clandestine romance between two women in the late 1800s. Unequivocally a tour de force in writing, direction, acting, cinematography, and production design, Sciamma has set the bar for what mastery in narrative filmmaking looks like in the 21st Century. (Nnett Rhys)

The body of a young vagrant woman is found in a farmer’s field. We are then presented with episodes from the final days of her life, as told by the rural folk that crossed paths with her. Her name is Mona, and on the surface she is the antithesis of the objectified central character of Cléo from 5 to 7. Unkempt and unruly, Mona embodies a full-scale rejection of feminine ideals.  But for Varda, the lives of both women are characterized by a profound inability to connect with others. While Cléo and Mona are both introduced with death sentences, Cléo is offered a way out, and her story is ultimately hopeful. Vagabond, with its eerie Hitchcockian score and ill-fated end, is a significantly darker, though no less compassionate or beautiful portrayal of social isolation. (Heather Noel) 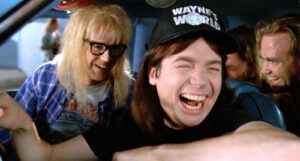 I think it’s very likely that I have seen this film more than any other and as far as I am concerned it is one of the funniest films ever made. While extremely silly, all the jokes are executed with an earnestness that makes them timeless and the quotables never stop coming. In addition to being a great comedy, it is worth noting that Penelope Spheeris has directed many great films focusing on music culture including the punk classic Suburbia (1984) and the quintessential documentary trilogy The Decline of Western Civilization. (Nick Keating) 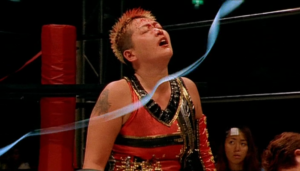 What does it take to be a wrestler? What would a person go through to get their shot at being somebody? GAEA Girls thrusts headfirst into the world of joshi puroresu as we join some rookies at the start of training. Saika Takeuchi is a second-time rookie and under the harsh tutelage of  Chigusa Nagayo (founder of GAEA and one-half of tag team titans The Crush Gals) she seeks redemption. This documentary takes us from matches to the behind-the-scenes daily lives in the GAEA dorm. Will the girls find freedom from patriarchal society or just a dropkick to the face?  While Kim Longinotto and Jano Williams spend little time explaining the world of Japanese women’s wrestling this snapshot into the astounding lives of these women is unforgettable. (Maggie Hardy) 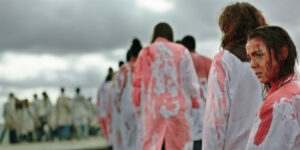 While it certainly is not the first film to use the horror genre as a trapping for a coming-of-age story (Ginger Snaps, The Witch), Julie Ducournau’s debut feature certainly sits among the greats of this trope. Garance Marillier is incredible as a vet school freshman who gains an appetite for flesh after eating meat for the first time. Combining a college film and a body horror, the film excels with its restraint that makes the moments of extremity all the more palpable and horrifying. Very excited to see what Ducournau’s next film Titane (Due out this year) has to offer. (Nick Keating) 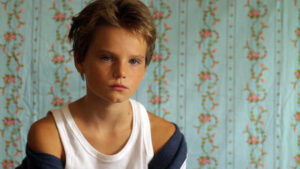 Growing up I had always been a tomboy. Wearing dresses was physically painful for me and I was lucky enough to have a supportive mother who let me wear, play and be whoever I wanted. Little did I know that around 20 years later I would come out to my friends and family as transgender. This movie I watched when I was younger and still identifying as a woman but it evoked such an intense reaction out of me. Looking back, I can see why. Tomboy is a raw and intimate look at childhood and identity centering on a 10-year-old french child Laure who, when their family moves, takes the opportunity to explore themselves with a new name and identity. Céline Sciamma, the director, has now been flung into the public eye with her film Portrait of a Lady on Fire but her other works deserve to be viewed as well. Her ability to capture these intimacies is something that I haven’t quite seen another director do when it comes to sexual and gender identity. And most importantly it really pushes home something we all need to remember—protect trans kids. (Elliot Konkin)