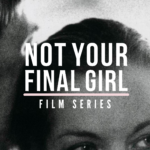 Not Your Final Girl is a celebration of contemporary and classic film, providing engaging discourse and cultural reflection of feminist cinema within the binds of horror and genre film. Historically, the female archetype in these films falls into sexualization and victimization. The final girl is the stereotypical surviving female protagonist, frequently portrayed as an underdeveloped character and as an overt sex symbol—NYFG aims to showcase films where female protagonists are multidimensional and able to express the emotions that women are so often told to suppress, destroying preconceived notions of feminine passivity and weakness.

Nicole Boychuk is the patron saint of the cinema. She is above all other descriptors, a cinephile, but also a musician, artist, writer, and friend. Nicole’s love for the medium began at a young age in the aisles of Blockbusters and she had her first transcendental cinema experience watching The Shining at the Garneau Theatre. You can get in touch with Nicole at linktr.ee/nic666le